What is a chromosome?

In the nucleus of each cell, the DNA molecule is packaged into thread-like structures called chromosomes. Each chromosome is made up of DNA tightly coiled many times around proteins called histones that support its structure. 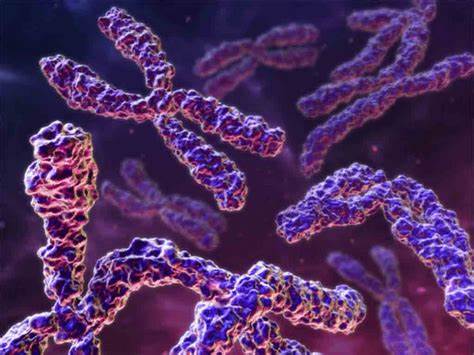 Chromosomes are the physical carriers of genes, consisting of DNA and associated proteins. Bacteria typically have one circular chromosome, while eukaryotes usually have linear chromosomes and vary widely in their sizes and numbers of chromosomes. All J.Y. Lee, T.L. Orr-Weaver, in Encyclopedia of Genetics, 2001.

Chromosomes have the capacity to transmit genes faithfully during cell division. The structures of the eukaryotic chromosome that allow them to do this are replication origins, telomeres which protect the chromosome ends, and centromeres for microtubule attachment and microtubule motor binding in cell division. Chromosomes must also be able to condense during cell division so that they can align onto the spindles and be moved to the spindle poles. In metazoans, chromosomes can be most broadly categorized into autosomes and sex chromosomes (chromosomes that have a part in determining the sex of the organism).
After 5 years we finaly have a list of all Chromosomes and pathogens connected.It prints out to 74 pages
It is neccesary to eliminate the Pathogens from the Chromosomes for optimum health.