From Russia comes this cutting edge diagnostic and therapy unit.

The Physiospect is an NLS biofeedback - bioresonance system. Connected to a computer it can diagnose and treat almost every known pathological condition, disease and illnesses, even before there are any physical symptoms. The Physiospect will determine the stress level of all organs and systems, it can select the most appropriate allopathic and/or homeopathic remedies, as well as suitable foods, herbal and nutritional remedies, and can identify emotional and physiological issues.

The Physiospect biofeedback - bioresonane NLS (non linear system) provides the therapist with the state of the various organs and systems of the physical body, without having to make a medical or surgical intrusion. As a preventive tool the Physiospect is unique in that it can detect a problem before there are any physical symptoms, and with the Meta Therapy the process can be reversed and illness prevented.

The Physiospect transfers the frequencies of a healthy organ to the client, thereby stimulating the body's immune system to heal, which the body is programmed to do. There is nothing new about this concept, it has been around for eons, going back to the ancient acupuncture system, and more recently with the Tesla coils and the Rife frequencies. With the advent of the modern computers the Russian scientists were able to create a computer Biofeedback- Bioresonance  program to stimulate the healing process. On the computer screen the client can see this transformation happening.

So how does it work?

It works by sending an infra-red triggering signal of extremely low intensity to the Bio-field around the brain via specially designed headphones. The principle is based on the fact the every cell tissue and organ has its own unique frequency pattern that varies as it experiences a load or stress. The healthier the area being investigated the more stable its frequency pattern is. We can direct the Physiospect to investigate the unique frequency of say the tissue of the right lung, given that the Bio-fields of both brain and lung tissue, (as with all parts of the body) are in constant communication with each other.

With an acute problem one single therapy session is often all that is needed. With a chronic condition it may require several sessions over a period of time.

The device scans each organ or tissue on a cellular level.

There are no other methods today that can find illnesses at the same early stage that the Physiospect does. 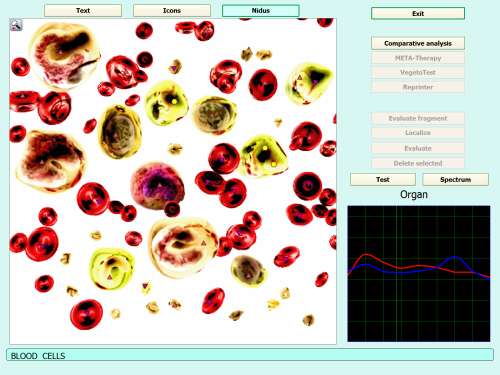 Imagine being able to test your blood without a pin prick!

In seconds rather than days.

It compares the measurements to a database of thousands of reference diagnoses and conditions. Physiospect uses special headphones for the cell communication, and it uses special readers built into headphones to read the cells own signals. Physiospect Biofeedback  finds out how strained an organ is, if there is any diseases developing, how much the cells are influenced by a specific disease, and which micro organisms are in the area. Physiospect is the most important tool we have for analysing an organ's stress level and dysfunction.

The Physiospect is a tremendous asset to anyone in the health field, allopathic or complementary. 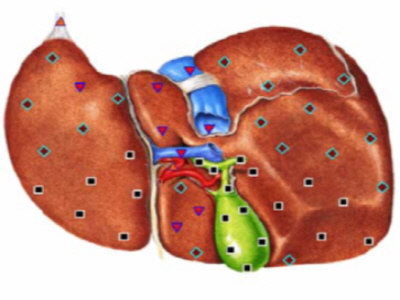 Liver before and after meta therapy.
The markers: Squares, Triangles, Colours indicate the organ stress level.

The stability of that scanned signal is picked up by resonance detectors mounted in the headphones. This information is then feed  back into the Physiospect software/hardware interface. That information is immediately compared with thousands of stored patterns in the database. The results are super imposed on an anatomical photo or image of the area being scanned. This provides an energetic representation of the condition of the area being evaluated. There are six possible representations of the scanned object or area shown with coloured numbered icons.

Physiospect first and foremost measures where in the body there is any weakness or disease. The frequency of several thousand healthy and sick organs and tissues have been measured for several years by the Russian researchers, and these make the basis of comparisons for the measurements. If the patient's frequencies in an organ or tissue are near the average of a healthy organ or tissue it is considered normal. The greater the difference is, the sicker the organ or tissue. Should the patient's results coincide with the average frequency of an organ with a specific illness, on will,  in addition, know which specific illness that patient has. All the measurements are done with respect to age and sex, so that the results may be as correct as possible.

For acute problems one treatment session is often sufficient to eliminate the problem.
For chromic issues several sessions may be necessary.

An effective correction can be made of the disturbed balance within the body by loading the organ frequencies into water, alcohol, pills or cream. The remedies will work in the manner of a Mora or Bicom therapy, converting the disharmonies frequencies into harmonious frequencies

The frequencies of numerous Homeopathic remedies stored in the computer can also be loaded into water, alcohol, pills or cream.

Remedies not in the computer can be tested for their effectiveness.
Virtual information test of nutritional supplements.

Physiospect can also measure the microflora in different organs. The electromagnetic frequency of known bacteria, parasites etc are stored in the software. One searches for these frequencies in different organs, and thus one can find out which microflora is in each organ. In the same way one can also measure the effect of several hundred pharmaceuticals from the database, to be able to find out which preparation is most effective for the specific problem. 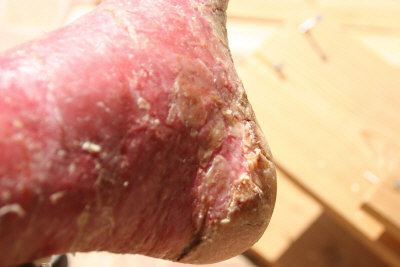 A scan of the blood identified the cause of this foot infection to be the Bacteria Pseudomona.
That was done in less than 60 seconds
This was later confirmed by a laboratory test.
That needed 5 days
The Physiospect also identified the remedy which cleared up the problem.
The remedy originally suggested was not only ineffective, but the patient was allergic to it.

The Physiospect can scan and treat every part of the body, including: heart and circulation system, lungs, stomach and intestines, the reproductive system, the skeletal bones, muscles, the endocrine system, sight and hearing, the brain, the nerve system, thyroid, adrenals, hypofysus, pancreas, thymus, the lymph system, blood, the spinal cord, chromosomes etc.

Physiospect gives no side-effects, and has many important advantages compared to traditional diagnostic methods. One of the most important advantages is that one finds out if an organ is weak and has reduced function, even if there is no other indication of disease. No other concept can find problems and weaknesses as easy and as early in the disease progression cycle.

How do biological systems recognize and isolate the necessary information from the background noise and in what manner do intracellular communications take place?
The research on energy fields around plants and animals has concluded that there exists an extremely weak low frequency vortex magnetic field around biological systems.
People have known from long time back these phenomena found in the Yajur - Veda and traditional Chinese medicine.

The principles of the Theory of quantum entropy logic give justification to claim that a biological organ with pathology have an unstable (meta stable) state and Physiospect functions according to the principle of amplification of the initiating signal with the disintegration of meta stable systems involved.

The Physiospect is a system of electronic oscillators resonating at the wavelength of electromagnetic radiation, whose energy is equivalent to the energy breaking down the dominant bonds that maintain the structural organization of the organism under investigation. The magnetic field of the molecular currents, affected by external fields, lose their initial orientation, which causes misalignment of the spin structures of de localized electrons of admixture center of cortex neurons; that, in turn, gives rise to their unstable meta stable state whose disintegration acts as an amplifier of the signal. Physiospect produce a preset bio electrical activity of brain neurons. With this it becomes possible to selectively amplify signals hardly detectable in the back ground noise and to isolate and decode the information they contain. 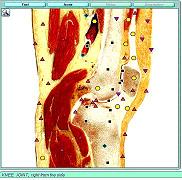 Physiospect detect the origin of this radiation, decodes and displays it in colours on the computer screen where a graphic model of the organ is shown. Following the rules of quantum chromo kinetics, we represent entropy values of any organ as spectrum colours that will change from light yellow (minimum entropy values), through orange to red and purple, nearly Black (maximum entropy values).

It is possible to single out a number of stationary states corresponding to a certain entropy potential and to selectively interact with the spectrum of electromagnetic radiation. Colour marks that are placed upon the organ picture make it possible for the physician to determine the site of a pathological process. By comparing the range of colours of the marks and their arrangement on the organ one can judge how the processes of disintegration of biological structures go on and thereby make a health prognoses. In order to define a pathology area of the organ there is a mean to localize a pathology nidus.

All-in-one diagnostic device of causes and targeted therapy.
The top bio-energetic system in the field of functional diagnosis and therapy.

The device is an enrichment for any alternative medicine user, who would like to offer something special to themselves and to their patients. Medical doctors, naturopaths, therapists and patients are enthused in discovering the causes of unknown disorders and the targeted therapy to be applied.

Users refer that Physiospect is comparable to expensive devices such as ETASCAN or META-SCAN in searching the cause of disorders. The security of striking the target in the analysis is the result of a close cooperation between scientists, engineers and clinical application. It is this cooperation that makes this device successful. Physiospect is a bio-energetic therapy device already in use world wide.

The Physiospect is also compatible with Apple Mac computers running a PC emulator.